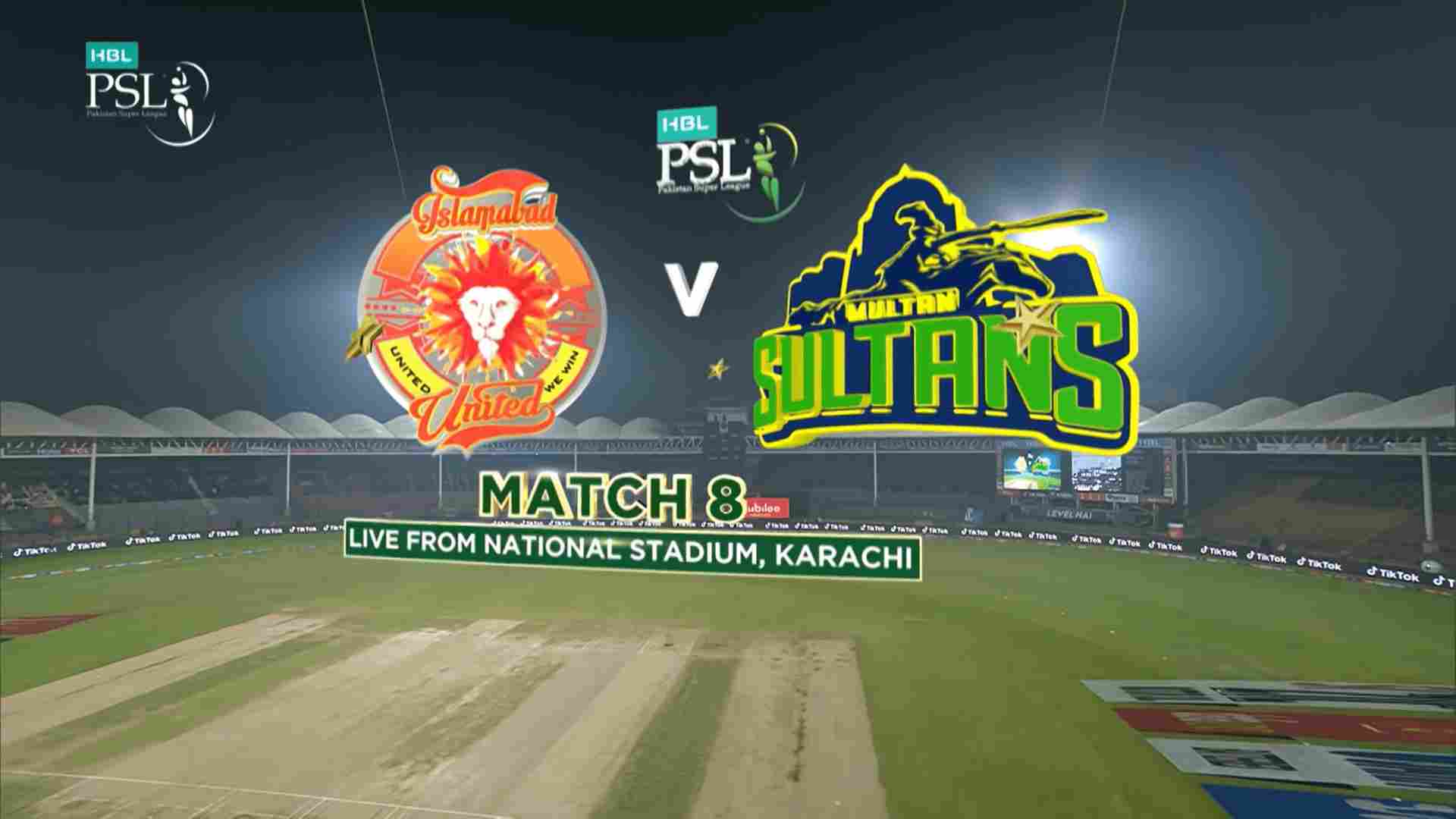 Shadab Khan‘s fighting 91 off 42 balls went in vain for Islamabad United, as Multan Sultans maintained their perfect start to the season by clinching a high-scoring match by 20 runs in Karachi. Shadab cracked five fours and nine sixes – which tallied to 74 runs out of 91 – to keep his side floating in a massive chase where they kept losing regular wickets.

Shadab Khan’s fighting 91 off 42 balls went in vain for Islamabad United, as Multan Sultans maintained their perfect start to the season by clinching a high-scoring match by 20 runs in Karachi. Shadab cracked five fours and nine sixes – which tallied to 74 runs out of 91 – to keep his side floating in a massive chase where they kept losing regular wickets.

The Islamabad captain arrived at the crease in the sixth over after Paul Stirling and Alex Hales had provided a quick start in reply to Sultans’ score of 217, racing to 22 off his first eight deliveries. Although two wickets from Khushdil Shah in the eighth over threatened to quieten things, Shadab continued striking boundaries virtually every over to keep Islamabad in the game.

With 55 to get off the final four overs, Shadab looked like pulling off a miracle for his team before a quiet 18th over all but sealed the match for Sultans.

Earlier, Tim David and Rilee Rossouw set Sultans up for a huge total by adding 110 for the fourth wicket in less than eight overs. David hammered 71 from only 29 balls on his way to smashing six fours and sixes each, while Rossouw hit an unbeaten 67 off 35 deliveries with four fours and six maximums. On their way, the pair took Sultans to their highest PSL score, and the fourth-highest in the tournament’s history. The 14 sixes that they hit were also the joint second-most in an innings in the PSL, and the 144 runs they scored off the last 10 overs were the third-most by any team.

The majority of that damage was done in the final six overs, in which Sultans piled up 107 runs. First David hit three fours off Mohammad Wasim in the 15th, before he and Rossouw combined to pick 21 off Faheem Ashraf in the following over.

With three overs to go, they took 23 off Hasan Ali, 14 off Wasim and again 21 off Hasan, who ended up conceding 52 from four overs. In the end though, the total would prove just enough, as Shadab lacked support in what turned out to be a closer-than-expected finish.

David, Rossouw make it four in four for Multan Sultans

Blistering half-centuries from Tim David (71 off 29) and Rilee Rossouw (67* off 35) helped Multan Sultans consolidate their top spot with a fourth successive victory of the season, beating Islamabad United by 20 runs on Tuesday (February 1) despite a mighty scare from Shadab Khan.

David and Rossouw put on a 110-run stand for the fourth-wicket in just 8.2 overs to give Sultans a commanding total of 217 for 5 that ultimately proved too tall a mountain to climb. The United skipper, however, kept his side in the hunt right until the penultimate over with his six-laden 42-ball 91 but the others failed to capitalize on their starts, and reprieves, to actually pull off the mammoth chase.

Put in to bat first, it was Shan Masood who missed out on a third successive fifty but laid just the perfect platform with his 31-ball knock studded with five boundaries and two sixes. Following up on his 83 and 88, Masood inflicted most of the damage in the powerplay with his 43 despite losing his in-form opening partner Mohammad Rizwan cheaply.

Masood kept the attack going from one end even after the powerplay but Marchant de Lange trapped him plumb lbw to bring some respite for his team. A miscommunication in the middle led to the early departure of Shoaib Maqsood as well, leaving the side in a spot of bother at 77 for 3 just after the halfway mark.

However, David and Rossouw turned the game on their head with their counterattacking knocks that saw a dozen sixes between them. The duo took their time to settle in but quickly turned it around to tear apart United’s bowling attack. Mohammad Wasim Jr was the first to come in the firing line, slammed for three boundaries by David in the over right after the time-out. Rossouw slammed 6, 4, 4 off successive deliveries in the next over, off Faheem Ashraf before his partner deposited two in the arc in the space of three balls.

David reached his 23-ball fifty with the first of the three sixes in de Lange’s 23-run 18th over and Rossouw did the same at the start of the 20th over. In the meanwhile,even as Sultans lost a well set David, Khushdil Shah kicked off with back to back to not let the momentum slip. And even though he failed to add anything to his score, Rossouw closed the innings with two more sixes to propel Sultans’ score to 217/5 from their 20 overs, with 107 added in the last six alone.

Shadab was relentless though, hitting three sixes in the next two overs to keep United in the game. Rumaan Raees too copped a couple of blows for the full tosses he dished out at the start of the all-important 19th over when United needed 34 more. However, Shadab succumbed to a bouncer off the third, top-edging to David at backward square leg to all but bring curtains on the chase. Wiley returned in the final over to officially end the chase with his third scalp of the night.