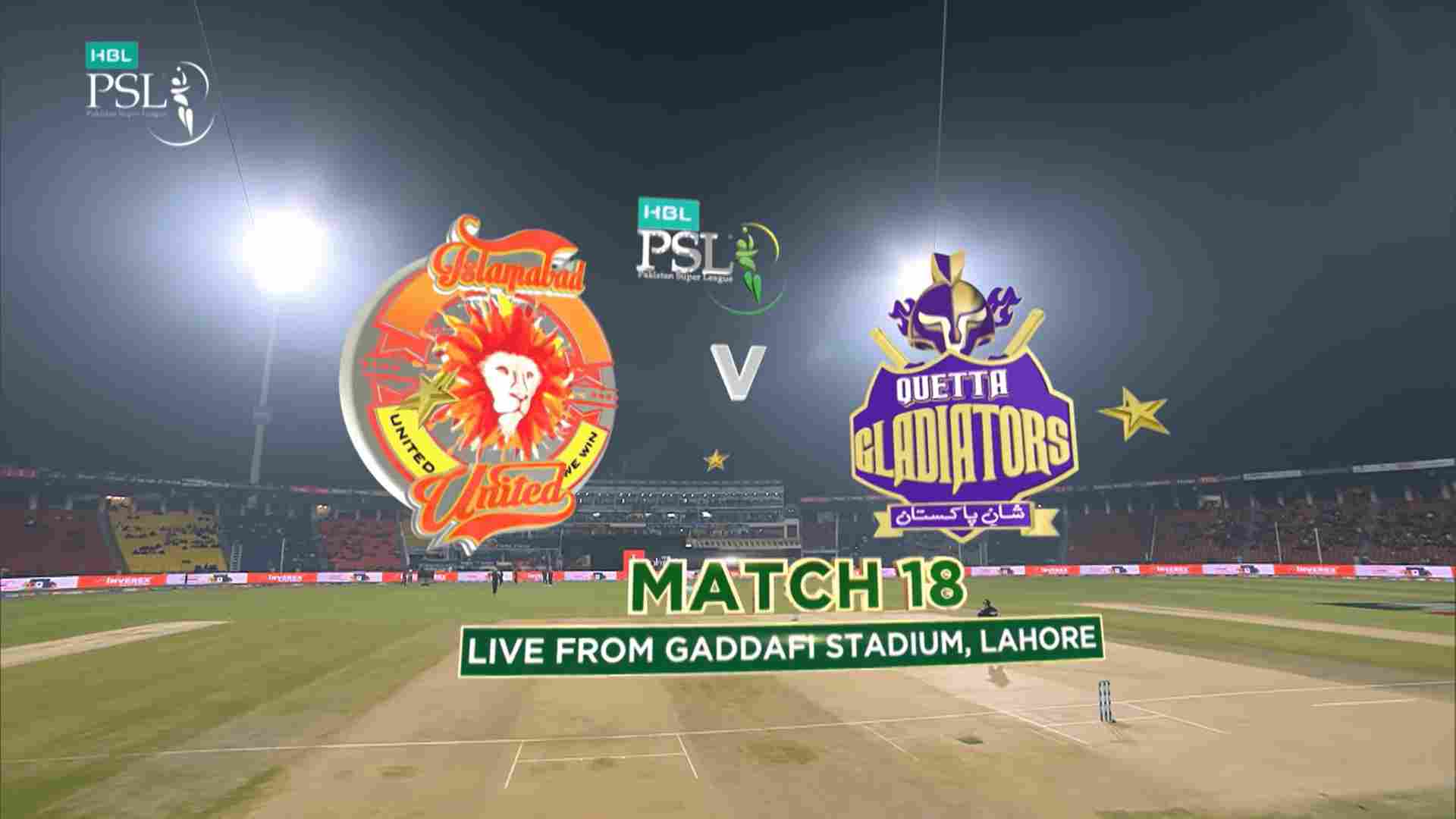 In what might have been the game of the tournament, Islamabad United somehow contrived to lose a humdinger of a high-scoring contest to Quetta Gladiators with three balls to spare. It wasn’t so much a team performance by Quetta as a collection of individual gems, and the masterpiece they produced saw Quetta finish with 203 for 5, overhauling Islamabad United’s 199 in the final over.

After being inserted by Quetta Gladiators skipper Sarfaraz Ahmed, a much changed Islamabad United side made a brisk start to their innings, putting up a Powerplay score of 58-1 – continuing with the all out attack batting approach despite the absence of Paul Stirling and Colin Munro, two integral pieces to that puzzle.

What followed however was the first real batting collapse of this PSL season for Islamabad United, with Shahid Afridi causing trouble against a United batting lineup missing the presence of a left-hander in their top order and some calamitous running between the wickets. Many teams would go into their shell after faltering to a score of 102-5 after 11.1 overs – the earliest in an innings Islamabad United have lost 5 wickets this season.

Instead of meandering along in search of salvaging a par score, up stepped Faheem Ashraf – who after a small phase of rebuilding, continued in the Islamabad United mantra, attacking 70% of the deliveries he faced for his 55 runs from 28 balls. He soaked up plenty of pressure when his high attacking approach didn’t succeed, shrugging off

the 15 dot balls faced in his innings and soldiering on, ending up with 5 fours and 4 sixes to guide Islamabad United to 199-8.

Just as he did in their last encounter, Jason Roy took on the Powerplay with significant reward, ending on 42* (20) himself and helping Quetta Gladiators to 72-0, their second highest ever Powerplay score – the highest being 74-1 in their last game. Roy has been in significant Powerplay form in the start of 2022, in his 7 innings he’s scored 180 Powerplay runs at a 159 strike rate and been dismissed just 3 times.

Roy’s variety of scoring areas makes him very hard to bowl to at the start of the innings, with Islamabad United generally leaving two men out on the leg side, Roy was able to adapt and score 34 of his 42 runs through the off side.

Dawson and Shadab Squeeze Facing spin and particularly the ball spinning away from the right-handers has been a real problem for Quetta Gladiators this season – they have a batting average of just 12 and a scoring rate of 6.42 rpo against leg spin and left-arm spin combined. Following a productive Powerplay for Quetta Gladiators, Islamabad United turned to leg spinner Shadab Khan and left-arm spinner Liam Dawson to tie down the Gladiators batters.

The spin duo were on from both ends in Over 7-11 – conceding just 32 runs (at 6.40rpo) and picking up the wickets of Jason Roy and Ahsan Ali. Across the game their combined figures of 4-59 from 8 overs at an economy rate of 7.37 rpo was enough to make things near impossible for Quetta Gladiators to return from, requiring 63 runs from the final 5 overs.

Sarfaraz and Akmal Win It

Quetta Gladiators will have highlighted their excellent Death Overs scoring as one area they could perhaps look to target when facing a near-complete Islamabad United side. Coming into the game, Gladiators had a scoring rate of 12.06 rpo in the final 5 overs – the required rate today was 12.60 rpo. Islamabad United on the other hand were the leakiest team at the death coming into this match, conceding 12.57 runs per over – a clear area of weakness for them.

Sarfaraz had survived the middle overs well and was joined at the crease by Umar Akmal – making his first appearance of the season. The plan was clear….sit in the crease and look to take down the United pacers, who have been very expensive going full at the death so far in PSL 7. The United pacers delivered, bowling 62% of deliveries full at the death and conceding at 16.40 rpo today – the plans were obvious and the execution from the Gladiators batters punished them today.

Islamabad United are perhaps the most flexible team on the T20 circuit right now but they have one clear issue – death bowling – and that could be their downfall as we head towards the backend of PSL 7.

In what might have been the game of the tournament, Islamabad United somehow contrived to lose a humdinger of a high-scoring contest to Quetta Gladiators with three balls to spare. It wasn’t so much a team performance by Quetta as a collection of individual gems, and the masterpiece they produced saw Quetta finish with 203 for 5, overhauling Islamabad United’s 199 in the final over.

There was the beautiful brutality of Jason Roy’s ball-striking, and a sensational 8-ball 23 from a returning Umar Akmal. Threading through them was a complicated yet ultimately triumphal half-century from the embattled Gladiators skipper Sarfaraz Ahmed, who sealed the win with a couple of final-over boundaries and bought himself – and his side – valuable breathing room in this competition.

The 20 overs of the chase were like an epic in themselves, with the passages of play so distinct from each other they were like self-contained episodes. The first segment saw Roy pick up where he’d left off against Lahore Qalandars, treating Islamabad’s bowlers with the same disdain. An early reprieve came when Mohammad Wasim sp

illed a sitter at cow corner, with Roy immediately punishing Hasan Ali – whose horror run in the PSL continues – with three successive fours to finish off the over.

Faheem Ashraf and Liam Dawson were treated with the same contempt, and it wasn’t until Shadab Khan cleaned up the England batter for 54 off 27 on the reverse sweep that Islamabad got a foot in the door. Unlike against Lahore, Quetta still needed a further 112 runs to get without Roy, and while the task had been made easier, they didn’t quite possess batters of the same destructive caliber to keep up the carnage.

For the next few overs, James Vince and Sarfaraz Ahmed plodded along seemingly oblivious to the requirements of the target as the asking rate soared. Sarfaraz in particular struggled for rhythm; it wasn’t until his 22nd delivery that he hit his first boundary. Once Shadab – who had another productive day with the ball – struck to remove Vince and then, crucially, Iftikhar Ahmed, the Gladiators needed 61 more off 27.

A cameo for the ages followed by Umar Akmal – remember him? – playing his first PSL game since the 2019 final. It lasted just eight balls, but in that time he struck three gigantic sixes, a yorker somehow scooped over long-on the shot of the night. When the whirlwind came to an end, the Gladiators needed just nine off seven.

Sarfaraz, who from the other end had also found his rhythm, was the perfect man to shepherd them across the finish line, sealing the win – and getting to an unbeaten half-century – with panache, a couple of sweetly-timed boundaries either side of the pitch capping the memorable win.

Much earlier on, when Islamabad were put into bat, their innings went, well, as you’d expect Islamabad innings to go. They went hard early on, and when they lost wickets, they went even harder. Alex Hales was in sumptuous touch, taking just 32 balls to get to his 50 and finishing with 62 off 38. It was Shahid Afridi who got him out, a

nd Afridi was one of the highlights of an electric night. Three wickets fell in his final over, one a run-out, and he inflicted another run-out with a direct hit himself as Islamabad collapsed from 100 for 1 to 109 for 6. By now, Afridi had figures of 4-0-27-2, and United were in danger of folding cheaply.

But they simply kept coming to Quetta. Tonight’s lower-order savior was Faheem, whose T20 batting pedigree had almost been forgotten. A terrific 29-ball 55 capitalized on the Gladiators losing some of their bowling discipline, and even then, there was time enough for Mohammad Wasim to smash the last two balls of the innings for six to help get Islamabad to 199, a total that had been almost inconceivable when Asif Ali had been as the sixth man out for Islamabad.

It looked as if they had gotten out of jail. But Roy, Umar Akmal, and in the end, Sarfaraz, proved reliable gatekeepers after all. Roy, Sarfaraz star in Gladiators’ win against United

Jason Roy starred with the bat again for Quetta Gladiators, scoring a 27-ball 54 while Sarfaraz Ahmed (50* off 32) also came up with a crucial knock to help his side secure a five-wicket victory against Islamabad United at the Gaddafi Stadium in Lahore on Saturday (February 12). Thanks to fifties from Alex Hales (62 off 38) and Faheem Ashraf (55 off 28), the United posted a formidable 199/8. But the total proved insufficient as the Gladiators got over the line in the final over to register their third win in six games.

Fresh off a century against Lahore Qalandars in a 200-plus chase, Roy once again set the platform for the Gladiators as he raced to a 24-ball fifty. Mohammad Wasim Jr was at the receiving end when he was hit for five fours in the third over, four of them by Roy. Wasim Jr. later put down a simple chance to give Roy a reprieve on 25 and the unfortunate bowler Hasan Ali ended up being hit for three successive fours soon after. The Gladiators amassed 72 in the powerplay and Roy raced to his fifty before being bowled by Shadab Khan while attempting a reverse sweep. Ahsan Ali got out in the next over while James Vince and Iftikhar Ahmed fell in quick succession after a useful stand, leaving the Gladiators at 139/4 in the 16th over.

Umar Akmal revived the chase with a breezy 23 off only 8 balls while Sarfaraz Ahmed provided the supporting role in the fifth wicket stand as they took the Gladiators closer. Although Akmal was dismissed in the 19th over, Wasim Jr. ended up conceding 19, leaving the Gladiators needing only 8 off 6. Sarfaraz finished it off with two successive fours off Hasan Ali to get to his fifty as he helped his team win with two deliveries to spare.

Earlier, asked to bat, United were a touch slow to begin with, especially Hales, but they picked up pace quickly as the Englishman moved from 8 off 10 to 34 off 21 by the time the powerplay was completed. He was involved in a 48-run opening stand with Rahmanullah Gurbaz, who was dismissed by Naseem Shah for a 13-ball 19 in the fifth over. Hales continued positively, helping the United post 58 in the first six overs and soon reached a 32-ball fifty. The United got to 100 at the halfway stage of their innings but were setback by quick wickets as they slipped to 109 for 6, losing five wickets for the addition of only nine runs.

That they managed to finish with a total close to 200 was thanks to Ashraf, who dealt in a flurry of boundaries to power his side forward. Ashraf struck five fours and four sixes – with three of those maximums coming in the 17th over off Ghulam Mudassar which yielded 22. He also hit a six and a four off Naseem in the 19th over and extended his partnership with Liam Dawson past 70 before both fell in the final over to James Faulkner. Mohammad Wasim Jr. ended the innings with two sixes as the United finished with a sizeable total.