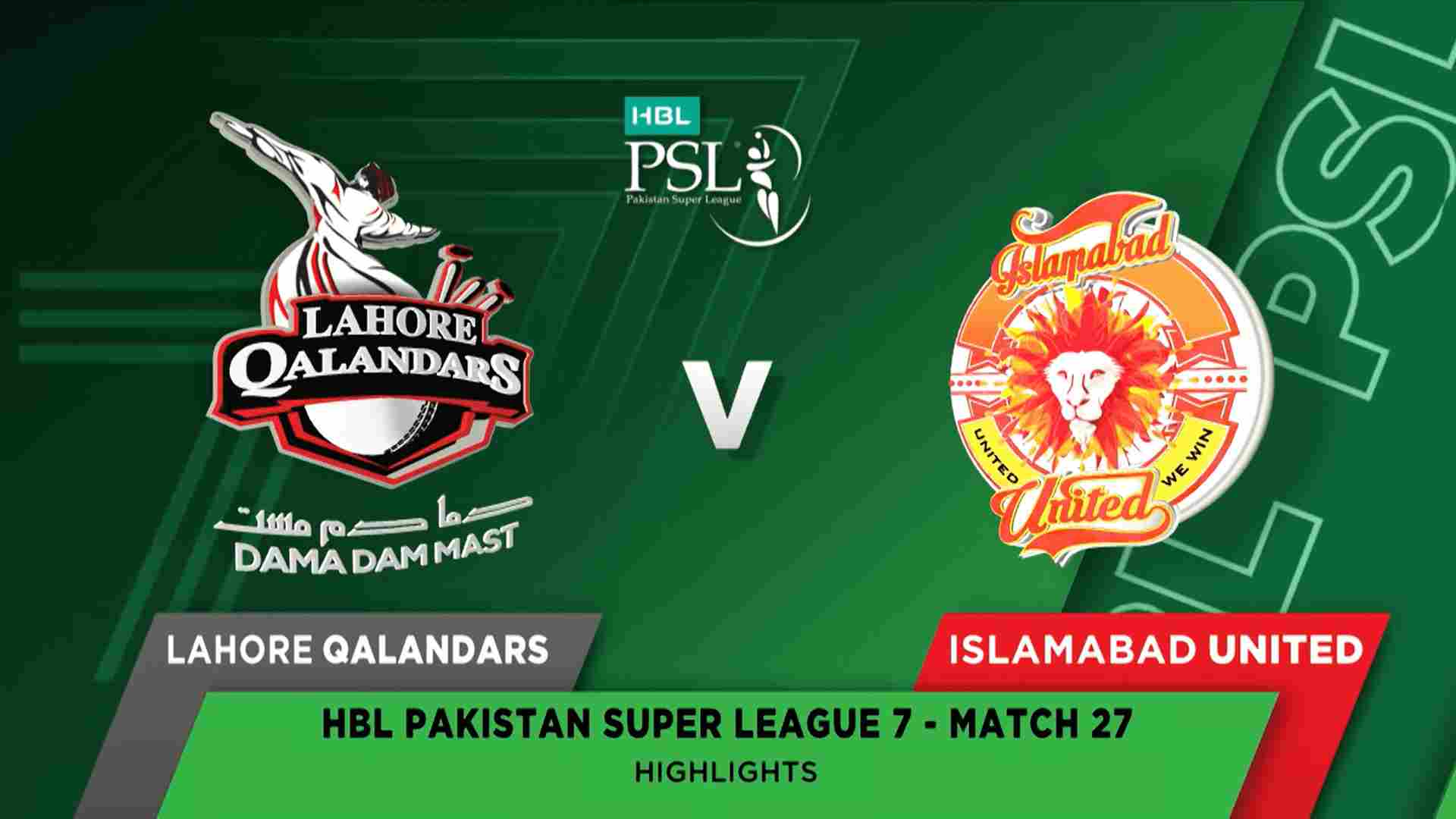 Lahore Qalandars Vs Islamabad United | Match 27 | PSL 7,  Harry Brook joined Fakhar Zaman at the crease just 2.4 overs into the game. After winning the toss and choosing to bat, Lahore Qalandars were struggling at 12-3.While Fakhar has generally received the praise for highlighting the star Qalandars batter, Brook has been steadily progressing in the middle order of the team, making brief cameo appearances.

Harry Brook’s unbeaten 102 off just 49 balls set up a thumping 66-run win for Lahore Qalandars as they consolidated their second spot on the PSL points table.

However, today, those roles were reversed.With an unbeaten 102 runs from just 49 balls, the young Englishman, who is still only 23 years old, scored his first T20 century. He became the youngest England player to score a T20 century overseas, surpassing Will Smeed, who had twice threatened the record earlier in the PSL.

Brook, who is usually a batter in the middle order, was able to take advantage of the situation today. His early arrival at the crease and the fact that the Islamabad United bowling attack was without Shadab Khan contributed to his strong, well-rounded game against pace.

A brutal counterattack considering his team was already three wickets down for not many but also somewhat symbolic of the mentality frequently associated with England’s T20 side, for which Brook made his debut just a few weeks ago, Brook was quick to demonstrate these skills, rushing to 21*(9) at the end of the Powerplay.

Throughout the night, Islamabad United struggled to contain right-hander Harry Brook, who made full use of the crease to create scoring opportunities.The Englishman was able to make full use of his offside game by moving toward the leg side of his crease. He scored 7 fours and 1 six and scored 40 runs from 13 balls, scoring on both lofted and grounded drives. Brook is one of the younger players who doesn’t fit the stereotype of being too leg side dominant and lacking the off side game to succeed at the highest level. Throughout his T20 career, he has a remarkable record playing the drive against pace, scoring 359 runs at a strike rate of 211 and being dismissed just four times.The Islamabad United pacers tried to follow Brook in his crease by going short and into the body, but Brook used his quick hands and strong base to pounce on those short deliveries and hook and pull them for six. This was the perfect counterattack to Islamabad United’s own counterattack, as Brook scored 35 runs from 13 deliveries that were shorter than 8 meters today.

Today’s innings provided a brief glimpse of what to expect from Harry Brook as a T20 player in the future. He is a dynamic hitter at close to 360° pace who can easily punish missed lengths with a variety of strokes. Early signs indicate that the usual go-to strategies of short pitched deliveries and high pace are unlikely to rush him; both were on display today, but he played with a control percentage of 90% against pace.A measly return of 28 runs in 6 innings for Hobart Hurricanes this winter was a brutal introduction to the T20 circuit for a bright young batter who is still developing his game, particularly against spin, where his Average Batting Impact sits at a respectable +0.0.

Brook himself will be all too aware of the challenges he faces in the future as his status as a player continues to rise.Brook is a destructive player against off-spin, which is the primary reason why his Batting Impact figure against spin has reached parity. However, he will be looking to improve when he faces bowlers who turn the ball away from him. Brook averages 18 against leg spin with a strike rate of 126 and 25 against left-arm orthodox spin with a strike rate of 93, which is a weakness teams are all too familiar with in the modern game.

Brook made his century in just 48 balls, which was the second-fastest in the PSL. However, the circumstances in which he batted made his score even more remarkable.After choosing to bat, Qalandars were reeling at 12 for 3 in the third over. In the second over of the innings, Faheem Ashraf struck out Phil Salt and Kamran Ghulam, and in the next, he struck out Mohammad Hafeez directly.

After that, Brook teamed up with Fakhar Zaman, and the two of them brought the innings back to life by adding 101 runs for the fourth wicket in just 63 balls.Brook was the more aggressive of the two, hitting 27 shots for his half-century.Fakhar, on the other hand, used 39 balls to get his.

Brook continued to bat in the same vein after Fakhar fell shortly after reaching the milestone.In the 20-run penultimate over of the innings, he smashed Waqas Maqsood with three fours and a six after taking Mohammad Wasim for two fours and a six in the 15th over.Brook finished his innings with ten fours and five sixes.

United’s chase for 198 got off to a good start, and despite Shaheen Shah Afridi returning both of their openers in the third over, they finished the powerplay at 59 for 2.

Rashid Khan slowed the scoring rate by trapping Wasim lbw and getting Azam Khan stumped, respectively.From his four overs, he went 2 for 19.United were 106 for 6 at the end of the 15th over, well below the target, and Zaman Khan also contributed with a few wickets.

With an unbeaten 30 off 26 balls, Danish Aziz tried to fight, but the challenge was too much.In the end, United could only manage 131 for 9.With eight points from nine games, they are fourth in the points table at the moment.