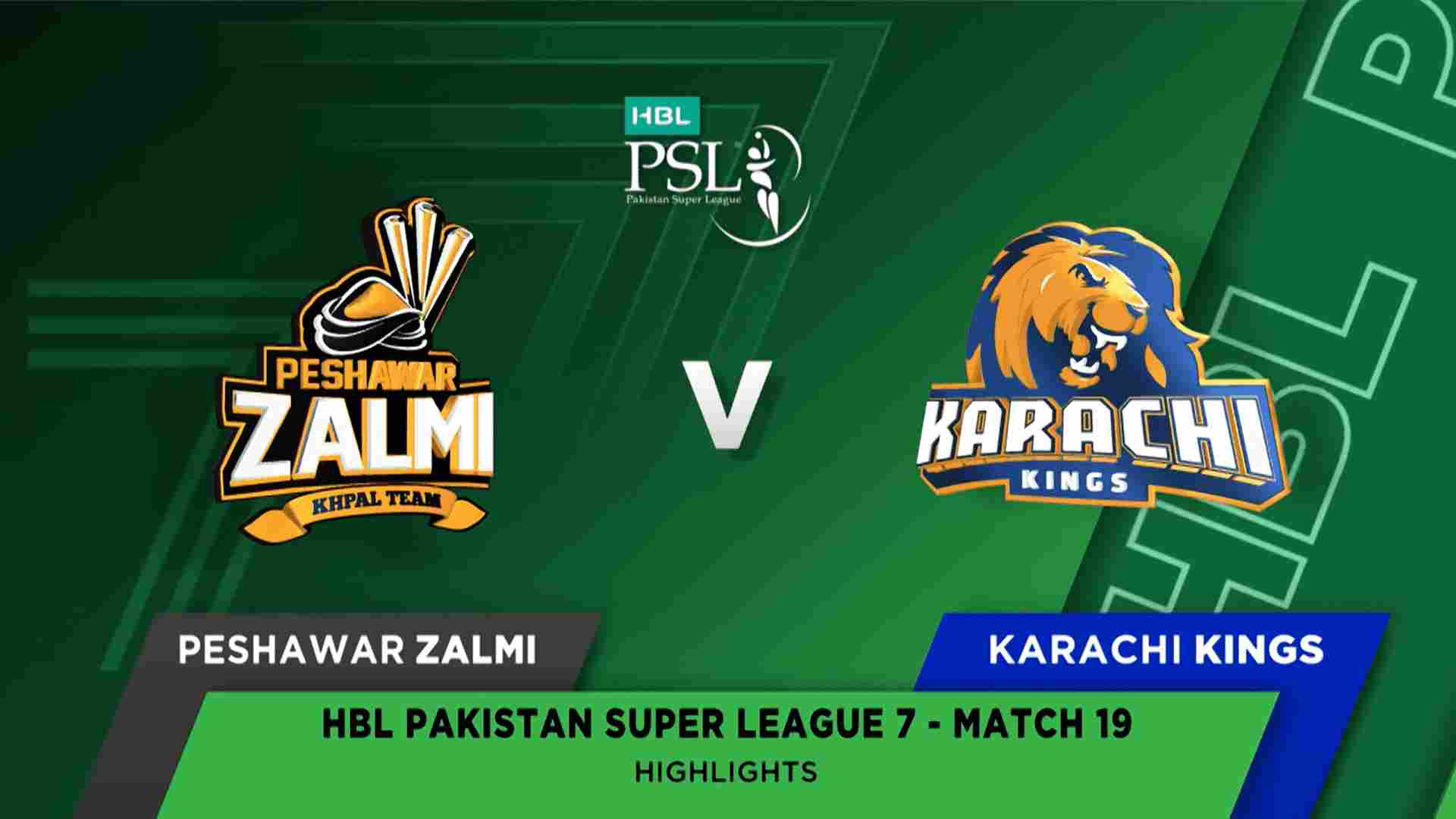 Peshawar Zalmi Vs Karachi Kings | Match 19 | PSL 7,  The bottom of the pile team, Karachi Kings, got off to a slow start today, allowing 51 runs in the Powerplay. They missed a flagrant review for caught behind and dropped three catches.

Lahore Qalandars have had a few shocking seasons in the PSL, but as the worst ever PSL side, this Karachi Kings unit would take some beating. Well, they took some beating today against Peshawar Zalmi, the side second from bottom this season, with Zalmi thrashing them by 55 runs. It was illustrative of the gulf between the Kings and every other side in this competition, and while Babar Azam‘s men still aren’t mathematically out after six defeats on the trot, the math you’d need to do to place them in the top four simply isn’t worth doing.

A 97-run opening stand from Hazratullah Zazai and Mohammad Haris took Zalmi to 193, and Kings never got going in the chase

They had taken advantage of every Powerplay opportunity before today’s game, but they failed to meet those standards today.Only Peshawar Zalmi have taken fewer wickets in the competition so far than they have in their 36 Powerplay overs bowled.The fact that Karachi has conceded just 8.44 runs per over in the first six innings is their only source of comfort.

Zalmi scored 97 for the first wicket, which was their highest opening stand since March 2019 and joint fifth highest ever.Mohammad Haris made an impressive 49 from just 27 balls in his debut, striking his first ball in for six.Hazratullah Zazai, an Afghanistan southpaw, played an unusually restrained innings for the Zalmi. He reached his fifty off 41 balls, which was his second slowest ever, but he was out the very next ball.

Zazai went after the fast bowlers and scored 23 runs off 12 pace deliveries (strike rate:192), but was much more restrained against spinners, getting only 29 runs out of 30 deliveries (strike rate:97). Peshawar Zalmi Vs Karachi Kings | Match 19 | PSL 7. Babar used smart match up management to expose Zazai to as much spin as possible and prevent him from running away with it throughout Zazai’s T20 career, when he struck at just 132 against spin and 153 against fast bowlers.

Zalmi scored 193/6 thanks to cameos from Cutting, Rutherford, and Malik. WinViz agreed, giving them a 74% chance after the restart.

Babar Azam continued his typically low-risk approach to T20 batting, scoring yet another fifty in response, but Karachi never really had a chance.Karachi was 33/1 after the Powerplay, with the required run rate already reaching 11.50 rpo.The Kings’ season is probably over, as they haven’t won any of their last six games and appear destined to support the table this year.

Karachi was easily the slowest team in terms of run-rate in the first half of this year’s competition, and they had the three lowest Powerplay scores in the tournament.Their low run-rate is due to the poor execution of their attacking intent, which is comparable to that of the fastest scoring teams.

The Karachi camp is becoming a real mess as a result of Babar’s apparent lack of faith in his supporting cast.To improve this going forward, Coach Peter Moores has a lot on his plate.From this vantage point, even a single victory might be considered a success.

Game 20: Lahore Qalandars vs. Quetta Gladiators: Shaheen did what he does best to start match 20. Taking the new medication out of the bag, arms flailing, and stumps all over.On fifty or more occasions, 42 bowlers have won the first over of a match.None of those 42 have a bowling average that is higher than Shaheen’s, with an average of 15.55 for his 27 wickets.He is a unique talent that is getting better and better, and he is probably the best first-over bowler in T20 cricket history.

He elevated his team’s WinViz from 55% after the first ball all the way up to 72% at the end of the first over by removing Roy and Vince on consecutive deliveries.Shaheen had taken two wickets in his first over for the second time.They’ve both happened in the last four months.

Quetta never came back, and at the halfway point of their innings, they were trailing 56-5.Rashid Khan bowled a typical underwhelming four-over spell, going through his repertoire of deliveries and consistently attracting false shots.He finished with figures of 1/13 from his allocation, which was his second lowest four-over spell in his PSL career. Only Iftikhar Ahmed was able to put up any significant resistance against Quetta, who were constantly playing catch-up in the back end after the initial assault.On his way to making 52, he got his team up to 141-7.Fakhar Zaman continued to exhibit his rich vein of form as he reached yet another century and guided his team to victory, with exactly 50% of Iftikhar’s runs passing through midwicket. His sixth 50+ score in seven PSL7 knocks was this one.Only nine players have ever scored more than 400 runs in a PSL season, and Babar Azam has only had higher batting averages in his last two games in PSL5 and PSL6.

By eight wickets, Lahore won the match and moved into second place, four points ahead of third-place Islamabad.An expertly orchestrated clinical performance by their two southpaw talismans:Fakhar and Shaheen

Professional Peshawar Zalmi defeated Karachi Kings for the sixth time in a row. After a 97-run opening stand between Hazratullah Zazai and Mohammad Haris, Zalmi reached 193, and Kings never got going in the chase. Peshawar Zalmi defeated Karachi Kings by 55 runs, 193 for 6 (Zazai 52, Haris 49, Jordan 3-41). Lahore Qalandars have had a few shocking seasons inThey were defeated by Peshawar Zalmi, the team that is currently in second place in the standings, by 55 runs today.It was illustrative of the gap that exists between the Kings and every other team in this competition. Even though Babar Azam’s team has lost six straight games, the math required to place them in the top four simply isn’t worth doing.

Mohammad Haris, a 20-year-old opener who served as Hazratullah Zazai’s senior partner, was the catalyst for Zalmi’s victory.As a sign of intent, Haris hit Imad Wasim with the first pitch he faced, and while the Afghan struggled to find rhythm, the young Haris was finding the middle of the bat exceptionally well.Haris was finally run out for a 27-ball 49 as he tried to reverse-sweep Mohammad Nabi as the pair made 97 in the first ten overs.

The Kings pulled Zalmi back a little during the spell of play that followed, and as the run rate dropped, the boundaries dried up.Qasim Akram struck to eliminate Zazai for 52 and Shoaib Malik took as much time as necessary sheet material in.However, Babar’s bowlers lost their lengths and discipline in the last four overs, and Slicing and Rutherford were there to rebuff them.All of the Kings’ attempts to contain the Zalmi innings were dashed when the final four overs saw a total of 51.

However, their approach to the chase was unforgivable, even if the Kings’ use of the ball was careless.Only 12 runs were scored in the first three overs, two of which were bowled by part-timer Malik. Sharjeel and Babar confusedly shied away from aggressive play and instead unleashed conservatism.Already, the run rate had risen above 10;It would never again reach single digits.

Still, the Kings appeared to be content with a crushing defeat as long as they weren’t bowled out, and they didn’t seem to act irate in the slightest.Salman Irshad got rid of Sharjeel early, and even though Babar stayed around and scored 59, it didn’t help his team much.To get there, all he had done was scratch around and use 46 balls, and he never seemed to realize how urgent a serious chase would be.Before the ball tracking even confirmed what was obvious to the naked eye, he chose to review while trapped square in front, causing even more farce.

However, he was not the only one to blame.Joe Clarke’s similar struggle to find any rhythm suggests that the malaise has spread to the side.Before fellow Englishman Liam Livingstone cleaned him up and put him out of his misery, he nudged and nirdled his way to a run-a-ball 26.

However, the Kings had already accepted their fate, so it didn’t matter.Zalmi were professional, which was all that was required of them against this broken side.Even though they aren’t out yet, you can almost feel them wishing they were as they stumbled to 138 at the end.