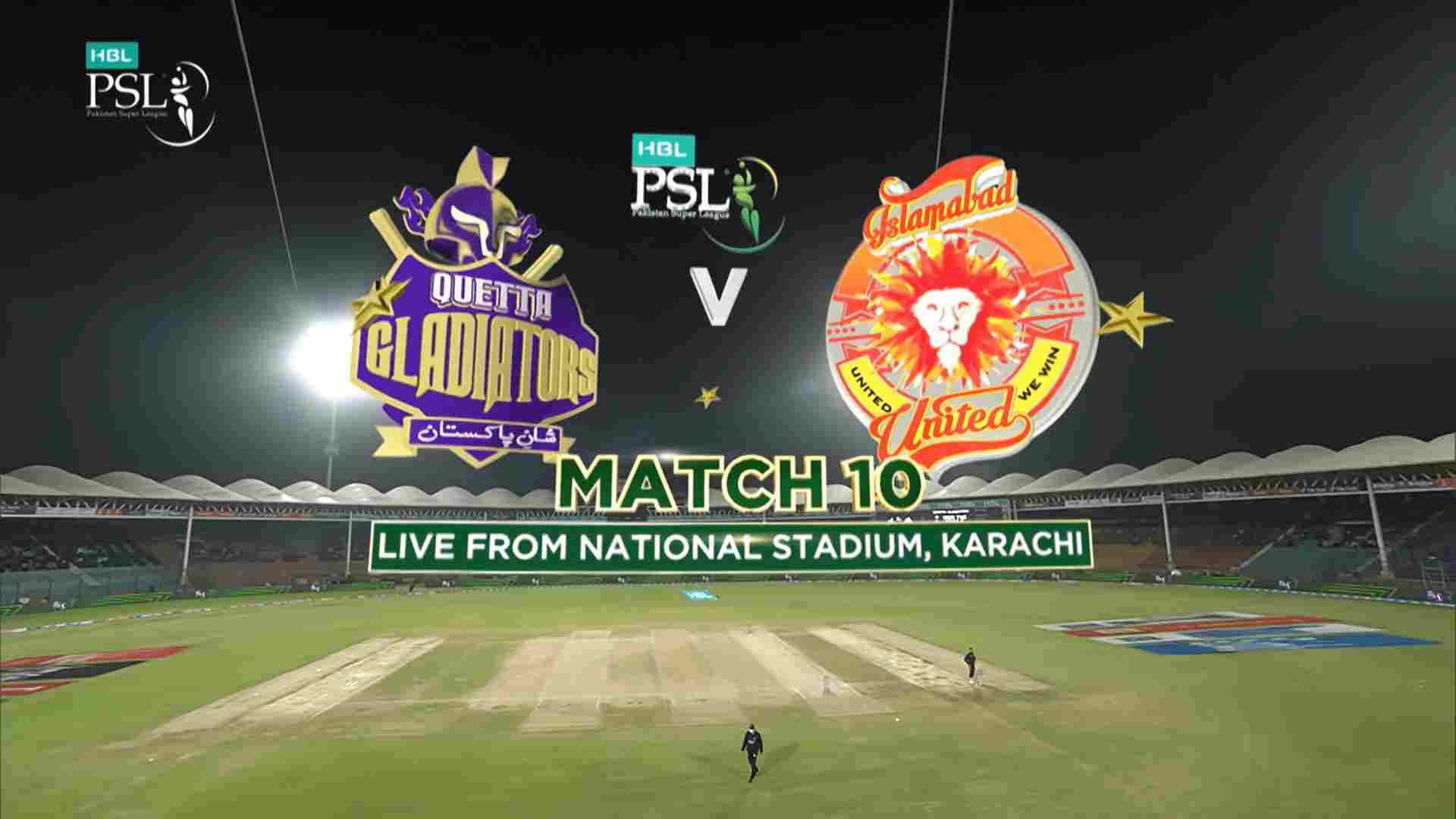 Quetta Gladiators Vs Islamabad United | Match 10 | PSL 7, Before this week, Islamabad United had won just 10 of 33 matches batting first, and lost only 6 of 33 while chasing. But the team that most famously goes by the numbers have turned them on their head over the last two games. After they failed to chase 218 against Multan Sultans on Tuesday, they went on to defend a 200-plus total on Thursday, thrashing Quetta Gladiators by 43 runs after a devastating batting performance.

Shadab seals United’s 43-run victory with five-for as they move up to second,

Before this week, Islamabad United had won just 10 of 33 matches batting first, and lost only 6 of 33 while chasing. But the team that most famously goes by the numbers have turned them on their head over the last two games. After they failed to chase 218 against Multan Sultans on Tuesday, they went on to defend a 200-plus total on Thursday, thrashing Quetta Gladiators by 43 runs after a devastating batting performance.

Paul Stirling (58), Colin Munro (72*) and Azam Khan (65) all registered whirlwind half-centuries as United racked up 229, the fourth-highest score in PSL history. Shadab Khan then cleaned up with the ball, taking five wickets for 28 to bundle Sarfaraz Ahmed’s side out for 186.

United’s all-out attack got them to within 20 runs of an unlikely chase on Tuesday, but batting first here, there went even harder, if possible. Stirling whacking Mohammad Nawaz over cow corner off the second ball was an omen, and with Alex Hales and Munro joining the onslaught, United plundered 81 off the powerplay. They barely seemed to notice that the field had spread out, though, with the scoring continuing unabated across the next eight overs. By this time, Azam, playing against his former side and the one coached by his father, Moin Khan, had joined the attack, and singled Shahid Afridi out for particular punishment.

After United had raced along to 173 in 14 overs, Gladiators somehow found a way to rein them back in, thanks to some brilliant variations by Sohail Tanvir and Naseem Shah. Only 36 came off the next five overs, but with Sarfaraz’s side playing just five bowlers, they were just putting off the final Afridi over; he had already conceded 47 in three. Azam bludgeoned him for three more sixes before Afridi finally yorked him, but by then he’d gone for 67. It’s the most expensive anyone has ever been in the PSL, and the second-most expensive figures for a T20 spinner in any competition.

Gladiators had for some reason left the free-scoring Will Smeed out of the line-up, opting to play with just three overseas players, and pairing emerging cricketer Abdul Bangalzai with Ahsan Ali up top. The youngster struggled and fell early, and while Ahsan Ali clubbed eight fours and a six en route to a 26-ball fifty, Shadab snared him the very next ball. Despite Ahsan’s best efforts, his side were way behind the monstrous asking rate at that point, and the scoreboard pressure saw the United captain run riot. Ben Duckett was undone by a slider before Iftikhar Ahmed, Sarfaraz Ahmed and Afridi all fell to the leg spinner, leaving Gladiators reeling at 110 for 7.

It was left to Nawaz and James Faulkner to keep the scoreline respectable, something they managed through an entertaining 76-run partnership off 32 balls. But while it prevented an absolute bloodbath, United returned to have the last laugh, cleaning up the final three in four balls to condemn Gladiators to a comprehensive defeat.

Islamabad United picked up their second win in the Pakistan Super League over Quetta Gladiators in Karachi. After setting the Gladiators a massive 230 to win, the Gladiators fought until the end, but United had 43 runs too many as they bowled Quetta out for 186 in the final over on Thursday (February 3).

The Gladiators got off to a good start with their openers racing away to 54 off 35, giving them the perfect start in a steep chase. However, once that stand was broken, the slide couldn’t be halted as United struck with timely wickets as skipper Shadab Khan ran through the middle order to return 5-28. Ahsan Ali fell for a 27-ball 50 as the middle order batsmen couldn’t put on too many runs.

The falling wickets the runs became hard to come by and the run-rate began to mount. Mohammad Nawaz and James Faulkner then staged a counterattack and kept them in the hunt with a stand late down the order that fetched Quetta 76 runs in 32 balls, but as many as 70 were needed off the last 3 overs which was too much in the end. Nawaz fell in the penultimate over for a 22-ball 47, while Faulkner was unbeaten on 30 off 14 balls.

After being asked to bat, United’s openers got them off to a flier with Alex Hales and Paul Stirling adding 55 in 25 balls as the former fell in the fourth over. Stirling smashed seven fours and three sixes in a splendid 28-ball 58 to lay the platform for United to get a big score before falling in the eighth over with the total being 102. The breakthrough didn’t cease the momentum, however, as Colin Munro and Azam Khan en route respective fifties were unrelenting.