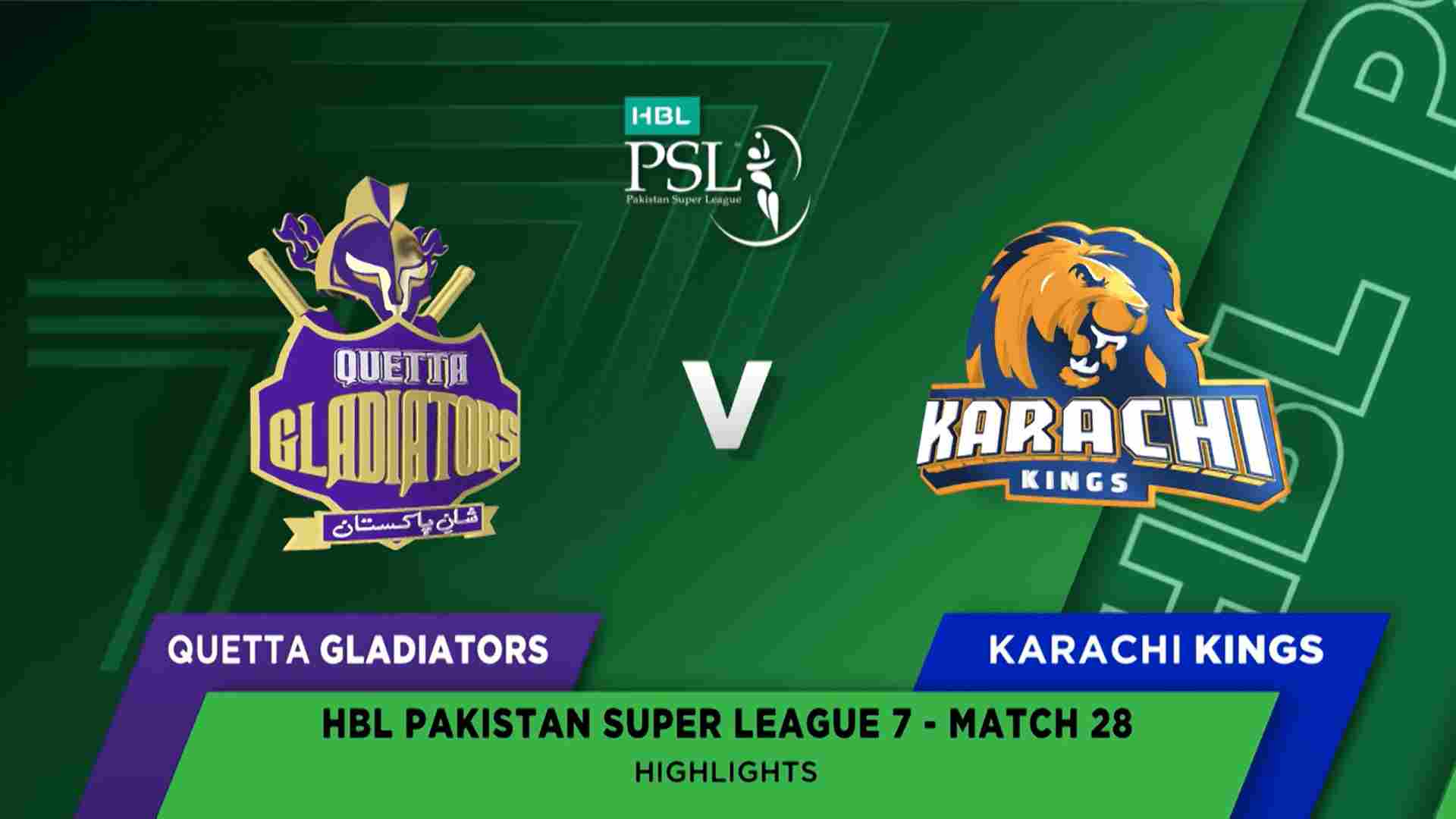 Quetta Gladiators Vs Karachi Kings | Match 28 | PSL 7,  Quetta Gladiators vs. Karachi Kings If you could give Quetta Gladiators one big thumbs up this season, it would be their ability to score at 9.94 runs per over against the quicks, the league’s fastest scoring team, while also maintaining the highest batting average at 36 runs per dismissal. With so many power hitters opposing pace at both ends of the batting innings, the combination of Jason Roy and Will Smeed or Ahsan Ali at the top of the order, as well as local batters Iftikhar Ahmed and Mohammad Nawaz in the final overs, had the potential to be difficult to contain this season. The issue, however, was that there was no filling in between those two areas of strength.

The first match of Sunday’s double-header in the PSL in Lahore was an odd one; neither the winning team nor the losing one would have been happy at the end of it. Quetta Gladiators needed to win their final match of the league stage by a huge margin in order to keep their hopes of qualification alive, mathematically. Kings, who held the upper hand for most parts, skittled away a strong start with the bat to go down by 23 runs.

Quetta Gladiators likely to be knocked out despite Roy, Shahzad heroics

This season, Quetta Gladiators scored against spin at just 6.63 runs per over, ranking second in the league;a wicket is lost against spin every 13 balls due to a lack of wicket preservation and a low scoring rate.Ben Duckett, a left-handed batter to complement a team of right-handers and one of very few in the squad with a positive Batting Impact when facing spin, sitting at +2.3 since the start of 2020, was the clear man to pencil in for this “spin protector” job for Quetta Gladiators when their side was first drafted. He was given just four games to make his mark before being placed on the bench.

Quetta Gladiators chose to keep their premium acquisition from the offseason, James Vince, rather than continue with Ben Duckett despite his obvious value in this side’s specific role.James Vince is a valuable T20 batsman, as evidenced by his performances for Sydney Sixers and Southern Brave. However, the Englishman has struggled in the Pakistan Super League, with a batting impact of -2.8, the lowest of any batter who has played at least 20 PSL innings.This season, Vince’s numbers are even lower, with an Average Batting Impact of -5.8 over 6 innings. This is a small sample size, but when you consider his previous struggles, it’s hard to attribute this to variance. Instead, these are simply poor returns from a player the Quetta Gladiators traded for and paid one of their three “Platinum” players.Naseem Shah – A One Man Assault

19-year-old Naseem Shah had an outstanding Pakistan Super Association campaign, getting 14 wickets with a 8.01 economy rate as the head of the Quetta Fighters assault.Even more impressive were Naseem’s splits throughout the innings, taking 5 wickets in the Powerplay and letting in just 8.62 runs per over at the end. Shaheen Shah Afridi was the only player to beat those numbers.In spite of Naseem Shah’s presentation, the other Quetta Warriors bowlers were incapable with the ball.The fact that Naseem had such a good campaign is a testament to his talent.

The young quick is all but guaranteed to be on the plane for the upcoming T20 World Cup in Australia later this year and is more than likely to be in their starting XI for the first match. Mohammad Nawaz was the only bowler to play more than two matches and maintain a positive Bowling Impact.When evaluating the remaining Quetta Gladiators bowlers, questions regarding recruitment and selection must once more be asked.Another early Quetta Gladiators draftee, James Faulkner, left in controversial circumstances after letting in 9.80 runs per over in six games.

The experienced Sohail Tanvir only took two wickets in seven matches and had an economy rate of 9.92, possibly indicating that the once-great left-arm quick is no longer performing at the level required in the Pakistan Super League.Their emerging player position, for which there was no permanent option, was the final major oversight.Ghulam Mudassar ultimately occupied the position for five games and averaged 11.35 runs per over.While the absence of Mohammad Hasnain, Mohammad Nawaz, and Shahid Adridi was unquestionably a problem for a portion of the seas, the Quetta Gladiators lacked capable back-up players to complement Naseem Shah and form a competent bowling unit.

Quetta Gladiators haven’t had the best of times this Pakistan Super League season, but they haven’t made things easy for themselves with player selection in the draft or during the season.Despite Roy and Shahzad’s heroics, Quetta Gladiators are likely to be eliminated. Karachi Kings’ forgettable season came to an end as Quetta Gladiators defeated Karachi Kings by 23 runs, scoring 166 for 4 (Roy 82, Gregory 1-22, Wasim 1-27). Clarke 52, Azam 36, and Shahzad 4-22 scored 143 for 8 in the second game of the PSL doubleheader in Lahore.

At the conclusion, neither the winning team nor the losing team would have been satisfied.To mathematically maintain their chances of qualifying, Quetta Gladiators needed to win their final league stage match by a large margin.Kings, who had the advantage for most of the game, lost by 23 runs after a strong start with the bat.

As Kings’ forgettable PSL season came to an end with their ninth defeat in ten matches, it was a case of old habits dying hard.Kings lost seven wickets for just 37 runs, and Gladiators’ Khurram Shahzad took four wickets in his T20 debut, completely reversing the chase.Kings were limited to 143 for 8 in their pursuit of the 167-run target as a result.

Gladiators made the decision to bat first, and their openers had trouble getting going.Jason Roy used the powerplay to get off to a fast start while Will Smeed fell early.However, Roy was far from belligerent, employing his blade’s edges more frequently.

As Kings captain Babar Azam rotated his bowlers frequently, Imad Wasim and Umaid Asif managed to sneak in a few economical overs.That didn’t stop James Vince and Roy from adding 90 for the second wicket.Vince was bowled by fellow Englishman Lewis Gregory while trying to play a big shot across the line, resulting in his dismissal for trying to increase the scoring rate.

Soon after, Roy scored his third century of the season, but he was bowled out by Mir Hamza in the final over.Gladiators scored 166 runs with 41 off the last four overs thanks to Roy and Iftikhar Ahmed.

When Babar and Joe Clarke, who had a forgettable game in the gloves, were in the middle, Kings were on track to blow the target and get their second win in a row.Kings’ best powerplay total of 51 was achieved by the duo, who also added 87 runs for the first wicket.Ashir Qureshi, a leg spinner, was run out for 15 in his second over, indicating the intent of the openers.

The winner of the match, Shahzad, first got past Azam’s defense before casting Sharjeel Khan, who hit 16 off seven balls.After that, Clarke scored his first fifty of the season and was bowled after missing a Mohammad Irfan attempt at a heave.

As Gladiators tightened the noose to end the game, Kings never recovered from those defeats.Even though Gladiators are likely to be eliminated, the campaign was won by Shahzad’s blows.

Khurram Shahzad, Jason Roy, Babar Azam, and Joe ClarkePakistanGladiators vs. KingsPakistan Super League Karachi Kings lose again in the Pakistan Super League Khurram Shahzad’s four-fer, which came after Jason Roy hit an 82 from 64 balls, led Quetta Gladiators to a 23-run victory over Karachi Kings. This gave Quetta Gladiators eight points, but they only have a slim chance of qualifying for the playoffs

Gladiator rallied around opener Roy’s 82 with 11 hits to the fence after choosing to bat first.He overwhelmed the 90-run organization with James Vince, who chipped a significant 24-ball 29 involving a six and three additional limits.After scoring a fifty off 38 balls, Roy switched gears and found support from Itikhar Ahmed, who scored a 21 off 11 balls to propel the team to a competitive 166/4.

But Joe Clarke and Babar Azam’s 87-run opening stand in just 11 overs made that seem a little less so.Khurram, on the other hand, struck twice in consecutive overs to retaliate against Kings by taking the wickets of Babar and Sharjeel Khan.Kings went from a comfortable 120/3 to 139/8 in the final overs, with only Imad Wasim managing a double-digit score. This was followed by a free fall.Khurram picked two tail-enders after Naseem Shah started the strutter, and he finished with figures of 4 for 22 from his four overs.

Gladiators and Islamabad United are tied at eight points, but Islamabad United has a better NRR of +0.101 than Gladiators, which means that unless United loses a record number of games in the second game of the doubleheader on Sunday, they will likely knock Gladiators out of the playoffs.The Kings, the champions in 2020, have won just once all season and are eliminated.