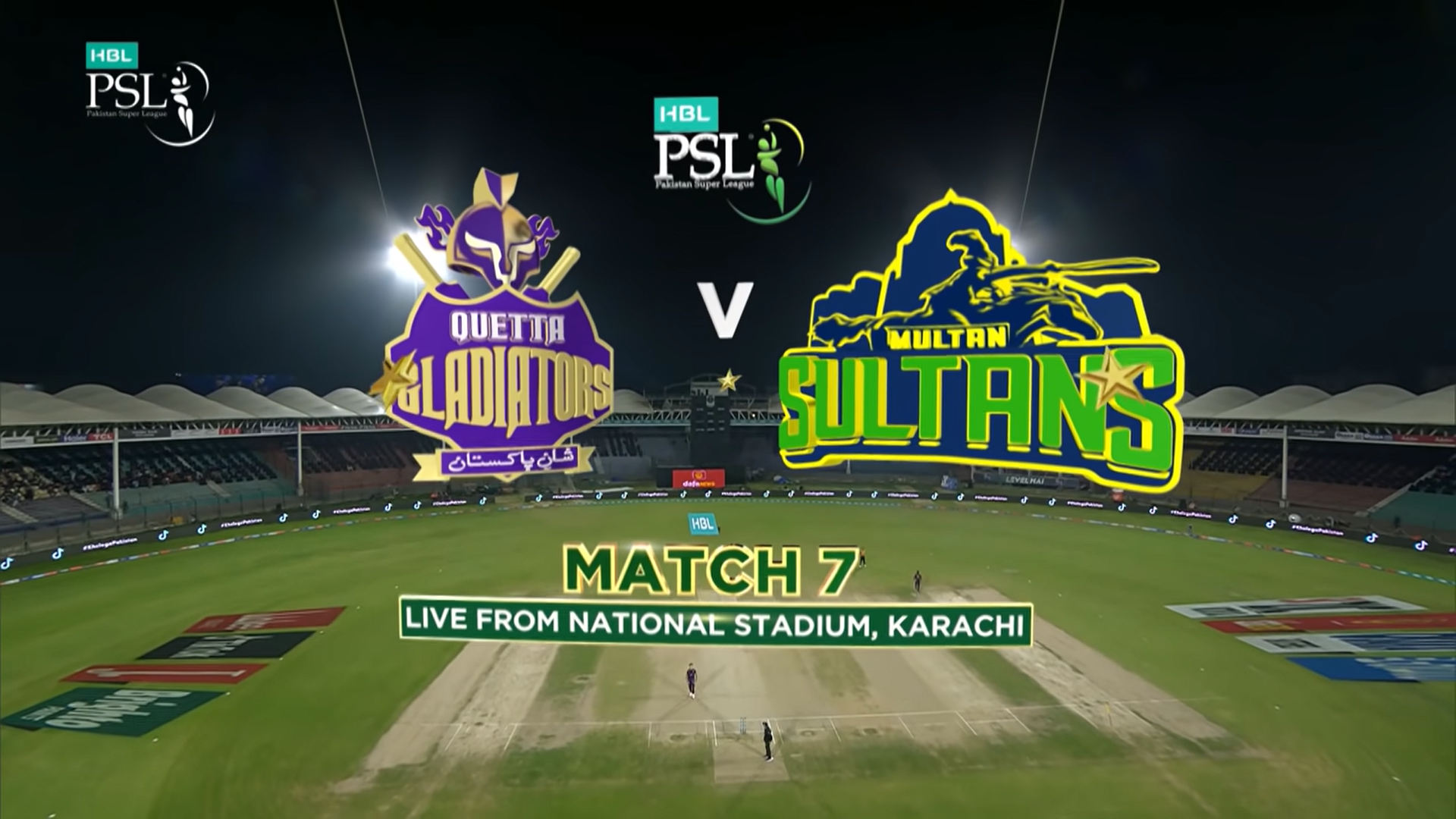 Quetta Gladiators Vs Multan Sultans | Match 7 | PSL 7, That is all we have from the PSL today. The in-form Sultans take on Islamabad United tomorrow. Do remember to tune in for that. See you soon!

It was a game that was the length of a shoelace from going to a Super Over, but because Tim David ensured the shoelace in question didn’t touch the boundary rope, Multan Sultans sealed a scintillating six-run win against the Quetta Gladiators. For the first time this tournament, a side managed a successful defense of a total after Sultans scored 174, thanks to a blistering 57-ball 88 from unlikely leading scorer of the tournament Shan Masood.

In a chase that saw wild swings of the pendulum, especially in the final five overs, David Willey was the star of the night, sending down two sensational death overs to just about keep Sarfaraz Ahmed’s men at bay.

Chasing 175, Khushdil Shah was superb in nailing the Gladiators down early with the ball, a superb return catch to get rid of Will Smeed the highlight. Ahsan Ali was good for a few lusty blows but the Sultans kept chipping away with wickets, and Imran Tahir burst through the middle order with the successive wickets of Ben Duckett and Ashir Qureshi, before Khushdil returned to remove a struggling Sarfaraz Ahmed for 21 off 23.

The final five overs of the contest were an epic in themselves. Sultans appeared to have sealed the game after Tahir’s three wickets helped his side burrow deep into the Gladiators’ lower order, but they hadn’t yet got rid of Iftikhar Ahmed. Traded in from Islamabad United, he demonstrated why he’s been such a hot property in Pakistan T20 cricket over the last year or so. Three sixes and a four in the 17th over suddenly put the Gladiators back in charge against all logic, with the asking rate down to under nine once more.

Mohammad Rizwan: We saw that the ball was gripping and it wasn’t easy to bat and it was his (Khushdil) night with the ball tonight. We were targeting 160-170 and we thought if we can do well in all the departments the toss doesn’t really matter.

Safaraz Ahmed: When Iftikhar got out that’s where we lost the game and that Faulkner run out also proved to be very costly. We wanted to take it to the last over and had we batted a little carefully we would have won the game.

Shan Masood, Player of the Match: What matters is mental space and I am in a very good mental space. If you do the basics right it will help you play freely in all three formats. Today was one day where you wanted Rizwan to play all the way with ball gripping and slower balls working, unfortunately we lost him early and managed to up the momentum in the end. Willey bowled outstandingly well and his spell was what won us the game in the end.

David Willey: I think it was a good catch in the end. Pace off was really important today. Calm head helps and just doing the basics right there in the end. I am trying to change pace and I knew the delivery was gonna work on this surface. We are the first team to win batting first and close games like these sets you up for the rest of the competition.

But Willey came in and bowled a nerveless, near-perfect 18th over, removing Iftikhar for a 13-ball 30 and conceding just three runs. Shahnawaz Dahani was less accurate in the penultimate over and fortunate not to see more slot balls dispatched, leaking 15 in his six deliveries. Crucially, however, a bit of brain-fade running from Sohail Tanvir cost Gladiators the priceless wicket of James Faulkner, and Quetta still needed eight with Tanvir off strike.

It was down to Willey to execute once more. Three balls later, he had allowed just one run and saw Tanvir hole out to square leg. Mohammad Rizwan, calmness personified in a game of nail-biting drama, fatefully sent the tall Tim David out to the cow corner boundary where Naseem walloped the next ball. David held on, and ensured he’d tipped the ball back in before overbalancing and came back to collect cleanly, clinching a dramatic win for his elated side.

Earlier – ages ago, it now seems – the Gladiators won the toss and inserted Sultans in. Mohammad Hasnain and Faulkner were miserly up top, and aside from Masood, no one could quite find their range for much of the innings. Rizwan fell for a rare second-ball duck after a miscue into the onside, and in his absence, the Sultans looked wobbly in the Powerplay. It was only at the death when the Gladiators lost their discipline slightly that the Sultans really made up for lost time. Once Masood slapped Iftikhar for two sixes in the 16th, the batters switched to death hitting mode, and a switch appeared to flicker on for Rizwan’s side.

Tanvir missed his lines at the end and found himself punished, and despite Hasnain continuing the good work he’d begun in the Powerplay, the Gladiators conceded 67 off the final five overs. The Sultans subsequently took the momentum with them at the change of innings, and though it ebbed and flowed over the next 20 overs, the final swing, for once, went to the side that batted first.